That sucky feeling changed something in you and you changed your practice. That's why these things happen, so that we can learn from them. 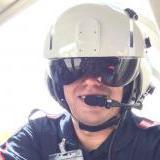 Bieber I personally think you are on the right track. Sounds to me that you are progressing well as a young practitioner. I always wanted my students and new medics to ask these types of questions. Wh

I am really hoping by these statements that your "on the rag again" I know that it is hard to armchair this but in my experience respiratory arrest secondary to COPD is not a death sentence. I have pe